Get plant information, gardening solutions, design inspiration and more in our daily newsletter.
SIGN UP
How to Make a Homemade Insecticidal Soap, Asparagus: How to Pant, Grow and Harvest, Osteospermum: Planting Guide

Asparagus: How to Pant, Grow and Harvest 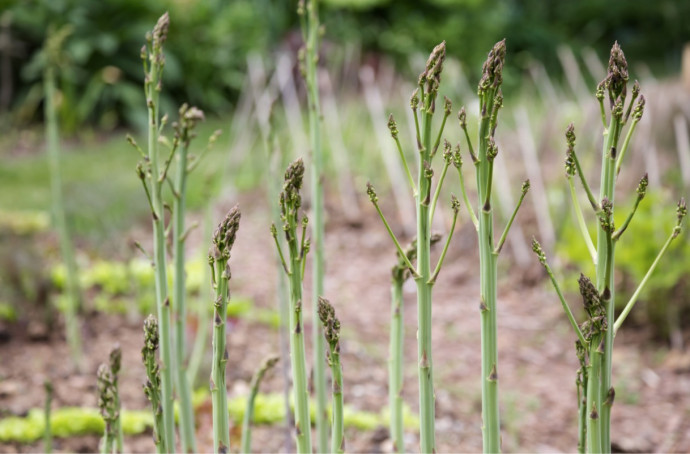 This gourmet crop takes time to grow, but the results are well worth it. Asparagus is one of the first vegetables that is ready to harvest in the spring and also one of the few perennial vegetables grown in the garden. Asparagus, viewed as the height of indulgence, can be grown in any garden with the correct care. If you love asparagus and want to grow some yourself, read on to learn how to cultivate your own tasty, tender spears.

Since it will be in the same spot for years, it's important to find a spot where it will have all the growing conditions it needs.

Its specific season and time from starting off until cropping has earned this perennial veg accolades such as ‘luxury’ and ‘gourmet’ – but everyone can afford a patch of asparagus on their plot! 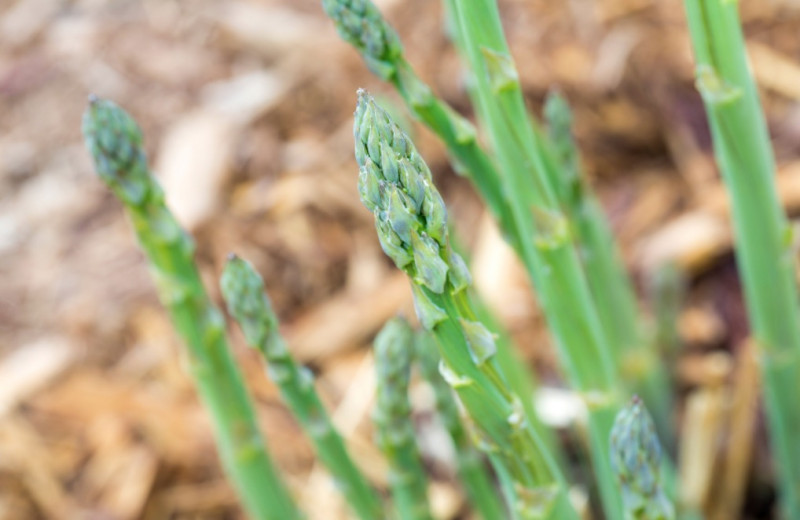 Patience will be well rewarded

Don’t let the time needed to wait before your first cut put you off: just get on with it! Even with the best of care, an asparagus bed won't hit its stride for several years. But once started off, a well-tended bed can last for 20 years. You’ve got two propagation options: open-pollinated or more modern all-male F1 hybrids. Open-pollinated seed (which is less vigorous than F1 hybrids, and therefore cheaper) sown direct needs at least three years to bulk up, one-year- old crowns two years, and F1 hybrid modular plants somewhere in between. The additional benefit of all-male plants is these beds often have more longevity.

How to thwart pests

Asparagus’s only nemesis is the aptly named asparagus beetle. The brightly coloured adults can build up in numbers; by far the easiest way to control them is with your finger and thumb. Other than that, follow my checklist on the next page, and you won’t go far wrong. 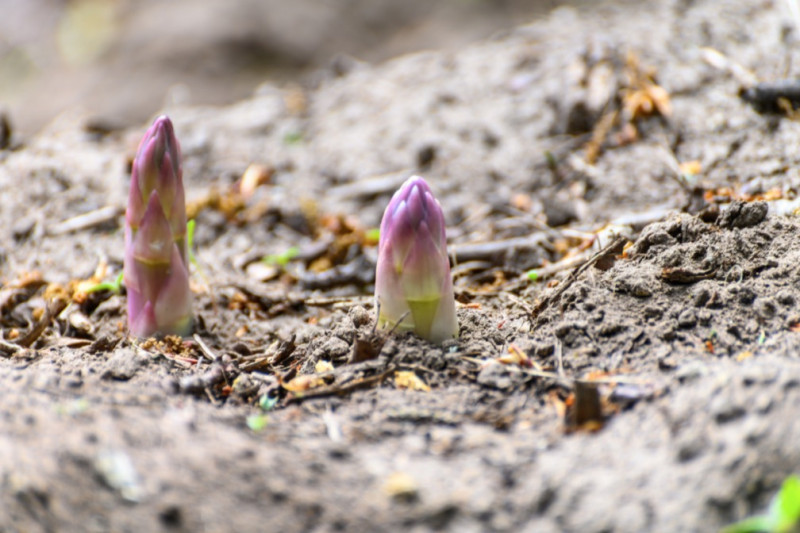 Let’s look at less costly growing methods, plus some growing techniques that guarantee decadence for us all!

Three ways to raise your asparagus

1. Direct-sown seed: Inexpensive open-pollinated varieties such as ‘Martha Washington’ and ‘Connover’s Colossal’ can be sown directly into the soil, then transplanted after one year into their final spacings.

2 Module-raised hybrids: Seed of F1 hybrids (such as ‘Ariane’) are more expensive than open-pollinated types, so nurture them. Sow under glass into individual modules, then plant out in summer at their final spacings.

3 One-year-old crowns: Plant these fleshy roots either in autumn or spring into their final spacings. Crowns are more costly than seeds but can be harvested sooner, so this is the preferred method for less patient growers.

Starting asparagus from one-year-old crowns gives you a year’s head start over seed-grown plants. While you might think that two-year-old crowns are a better option, they tend to suffer more from transplant shock and won’t produce any faster than one-year-old crowns. Buy one-year-old crowns from a reputable nursery that sells fresh, firm, disease-free roots. Plant them immediately if possible; otherwise, wrap them in slightly damp sphagnum moss until you are ready to plant.To plant asparagus crowns, dig trenches 12 inches wide and 6 inches deep (8 inches in sandy soil) down the center of the prepared bed. Soak the crowns in compost tea for 20 minutes before planting. Place the crowns in the trenches 1½ to 2 feet apart; top them with 2 to 3 inches of soil. Two weeks later, add another inch or two of soil. Continue adding soil periodically until it is slightly mounded above surface level to allow for settling. 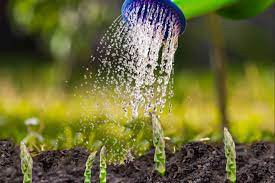 Asparagus plants grow best in full sun. Without enough daily sunlight, you will wind up with thin spears and weak plants that are prone to problems.

For a long-lived perennial like asparagus, it pays to take the time to improve your soil before you plant it. Work in plenty of organic matter and make sure the soil pH is in the neutral 6.5 to 7.0 range. Also get rid of any weeds and large stones in the area before planting. The soil must drain well so the plants are never sitting in water.

Asparagus needs regular watering, especially while young; give it 1 to 2 inches of water per week during its first two growing seasons; give older plants about 1 inch per week. If you give them a good start when you first plant them, and you'll have fewer problems in future years. Consider adding drip irrigation or a soaker hose to the asparagus bed.

During the growing season, asparagus prefers a temperature of 70 to 85 degrees Fahrenheit during the day and 60 to 70 degrees at night. In the spring, it will begin to grow shoots when the soil temperature reaches 50 degrees. Any frost after the shoots start growing will cause discoloration. You may see slow growth with temperatures above 85 or below 55 degrees.

Once you reach the heavenly harvest point, cut only for six weeks (in subsequent years, you can harvest for the full eight weeks). It’s crucial to stop after this point; mark the date on your calendar with a sad face. This way, you ensure the crowns have time to build up strength and food reserves for next year’s harvest.

Distorted young spears can be caused by slugs or frost damage. Cut them out, and new ones will quickly be produced.

To keep your asparagus bed productive, don't be greedy. The first year after planting, you can harvest a few spears from each plant. Pick for about two weeks and then stop, so the fronds can unfold and begin feeding the root system. Harvest for three weeks the next year, and four to six weeks after that. Pick too much, and your plants will not be able to develop the strong root system and energy reserves they'll need to produce an abundant crop of spears the following season. 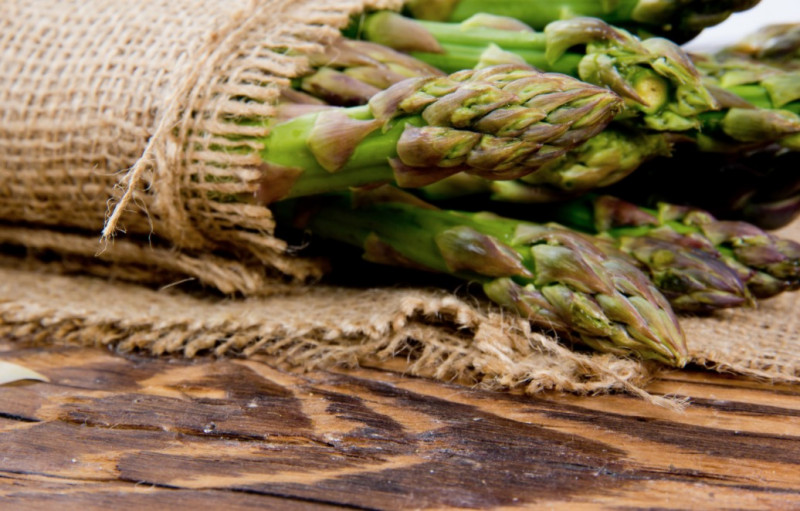