Get plant information, gardening solutions, design inspiration and more in our daily newsletter.
SIGN UP
How to Use Coffee Grounds in Your Garden, 9 Indoor Plants Care Tips, 8 Best Bathroom Plants: High Humidity Plants

How to Use Coffee Grounds in Your Garden 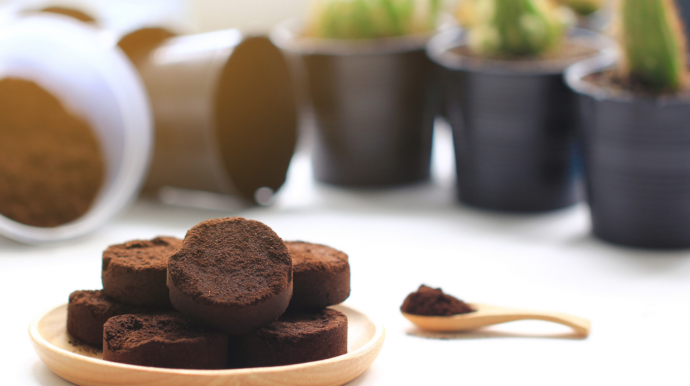 Common coffee grounds have many beneficial effects in the garden. Whether you make your cup of coffee daily or you have noticed your local coffee house has started to put out bags of used coffee, you may be wondering about composting with coffee grounds. Are coffee grounds as fertilizer a good idea? And how do coffee grounds used for gardens help or hurt? Today I’d like to tell you more about coffee grounds and gardening.

Coffee grounds appear to suppress some common fungal rots and wilts, and at the same time they have proven to be an effective replacement for peat moss (an endangered resource). But the best use for this ubiquitous kitchen waste is simply to add it to your garden compost. If you are not a regular imbiber of coffee drinks made at home, go to your local coffee shop and ask them to save their coffee grounds for you—they are usually happy to get the coffee grounds out of their waste stream and also to keep them out of the landfill. Add coffee grounds (you can even include unbleached paper filters) to your compost pile liberally, but the volume of grounds should not exceed 10 to 20 percent of the total volume of your compost pile or bin.

Here is a brief summary of scientific research. According to Dr. Linda Chalker-Scott, Associate Professor at Washington State University:

Coffee grounds do not add acid but do add humic properties. Humic substances, which are important chemical and structural soil components, are produced through coffee ground degradation. Carbon-to-nitrogen ratios change as well, generally starting out a bit higher than ideal (e.g. 25–26) and decreasing to 21, 13, 11, or even 9.4 in a year’s time. Less straightforward are the changes in pH that occur during decomposition. A commonly held assumption states that coffee grounds are acidic, but this does not hold true experimentally. While two studies on coffee ground composting reported mildly acidic pH levels of 4.6 and 5.26, others have measured neutral (7.7) to somewhat alkaline (8.4) pH levels. One researcher found that the pH level of soil treated with coffee compost rose after 14 to 21 days of incubation, gradually decreasing thereafter. Obviously the pH of decomposing coffee grounds is not stable and one shouldn’t assume that it will reliably, if ever, be acidic. 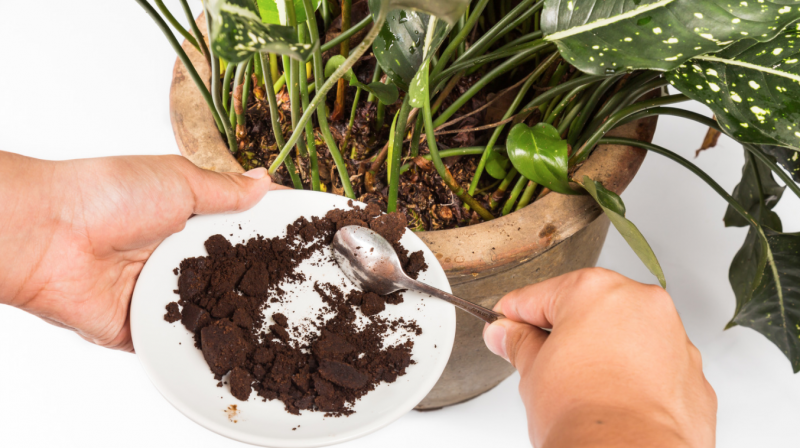 Many of us will have dumped the cold remains of a forgotten coffee in a plant pot at some point, and then perhaps wondered if it was the wrong thing to do! But it turns out that coffee grounds contain a good amount of the essential nutrient nitrogen as well as some potassium and phosphorus, plus other micronutrients. The quantity and proportions of these nutrients varies, but coffee grounds can be used as a slow-release fertilizer.

To use coffee grounds as a fertilizer sprinkle them thinly onto your soil, or add them to your compost heap. Despite their color, for the purposes of composting they’re a ‘green’, or nitrogen-rich organic material. Make sure to balance them with enough ‘browns’ – carbon-rich materials such as dried leaves, woody prunings or newspaper. 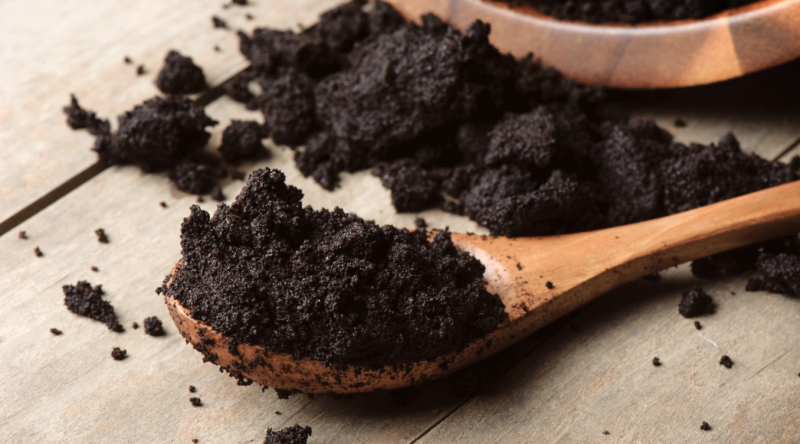 2. Coffee Grounds as a Natural Pesticide

An oft-repeated nugget of advice is to spread used coffee grounds around plants that are vulnerable to slug damage. There are two theories why: either the texture of the grounds is abrasive, and soft-bodied slugs prefer not to cross them, or the caffeine is harmful to slugs so they tend to avoid it.

However in an experiment slugs took just seconds to decide to cross a barrier of coffee grounds! The same researcher also sought to find out if coffee grounds would repel ants, with similar results – ants may not particularly like coffee grounds, but they won’t scarper out of your garden to get away from them. 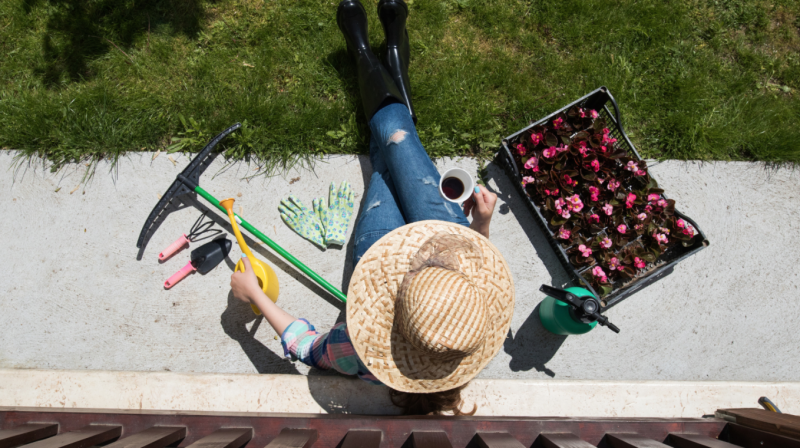 Mulching is incredibly beneficial but it’s notoriously difficult to come by compost, straw or other organic matter in large enough quantities at a low enough price. Using free coffee grounds seems like the perfect solution, but some gardeners have found that using coffee grounds directly on the soil has had a disastrous effect on plants. However, this seems to be linked to using thick blankets of it to mulch around plants and over seeds. 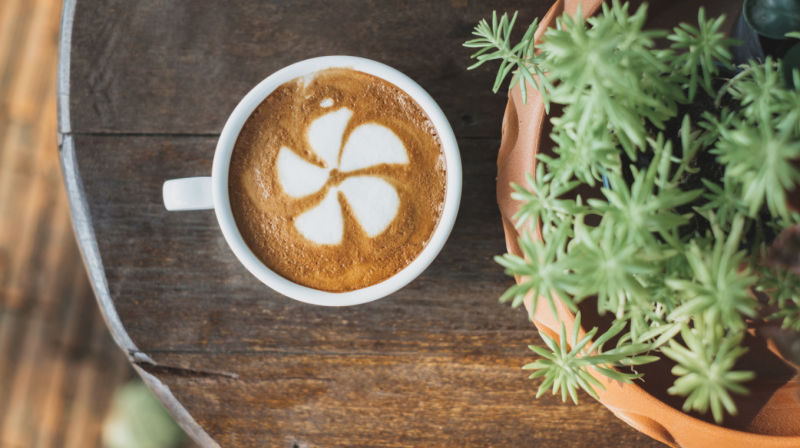 4. Coffee grounds can also be used in your garden for other things.

Other used for coffee grounds include using it to keep slugs and snails away from plants. The theory is that the caffeine in the coffee grounds negatively affects these pests and so they avoid soil where the coffee grounds are found. Some people also claim that coffee grounds on the soil is a cat repellent and will keep cats from using your flower and veggie beds as a litter box. 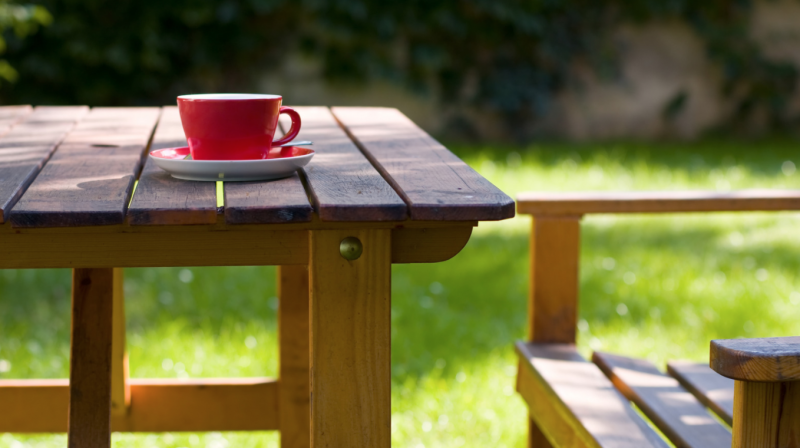 Coffee grounds and gardening go together naturally. Whether you are composting with coffee grounds or using used coffee grounds around the yard, you will find that coffee can give your garden as many benefits as it does for you.